Cookie preferences
This website uses cookies, which are necessary for the technical operation of the website and are always set. Other cookies, which increase the comfort when using this website, are used for direct advertising or to facilitate interaction with other websites and social networks, are only set with your consent.
Configuration
Technically required
These cookies are necessary for the basic functions of the shop.
"Allow all cookies" cookie
"Decline all cookies" cookie
CSRF token
Cookie preferences
Currency change
Customer recognition
Customer-specific caching
Individual prices
PayPal payments
Selected shop
Session
Comfort functions
These cookies are used to make the shopping experience even more appealing, for example for the recognition of the visitor.
Note
Statistics & Tracking
Affiliate program
Google Analytics
Google Analytics
With Google Analytics, we analyze how you interact with our website to find out what is good and what does not.
Provider: Google LLC (USA) or Google Ireland Limited (Ireland, EU) (Privacy policy)
Track device being used
Categories
Information 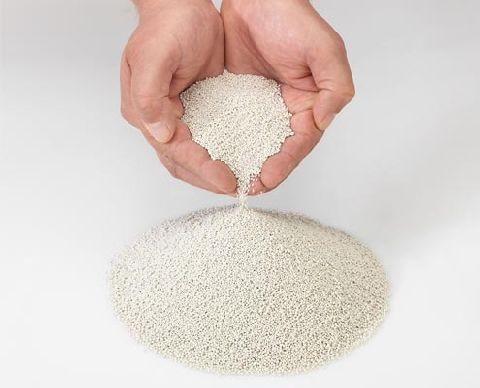 Delivery time: will be ordered / produced for you

55 liters of Extover® granules in a bag

The container size for the larger need. Ideal for filling your own containers, storage boxes or fire protection cushions. To delete the bag can be given directly to the fire source. The heat opens the bag and the pourable granules spread over the fire. Available individually or as palletized goods at 30 bags per pallet.

Extover® - The extinguishing agent for lithium batteries and metal fires

Extover® is a special extinguishing agent for fire and preventive fire prevention. The fire-fighting granules have been specially developed to combat class D hard-to-control fires. Even problematic fire loads such as lithium battery fires, magnesium fires, burning aluminum powder or Bengalos (high-light flares) can be mastered and extinguished. It is also ideal for preventive fire protection for the safe storage and transport of lithium batteries. It does not cause extinguishing water damage and is particularly easy to use.

The extinguishing effect of Extover® was tested by the MPA Dresden on lithium batteries as well as sodium and magnesium. All investigated fire objects were successfully deleted.

Extover® is made from environmentally friendly recycled glass and is safe for the user and the environment. The granules are made of pure glass and are therefore not flammable.

Function and Applications of Extover®

Extover® is used in all areas where there is a risk of lithium battery fires or metal fires. Examples include model making, repair shops, metalworking companies, airlines, storage facilities or in the industry.

Lithium cells carry risks due to overcharging, deep discharge or damage. When lithium batteries catch fire, conventional quenching with water is hardly possible without violent reactions. This is where Extover® comes in. The extinguishing granules are also suitable for preventive fire protection for the safe storage and transport of lithium batteries.

The manufacturing industry often struggles with hard-to-control metal fires. Aluminum and magnesium, in particular, are in demand as lightweight materials and can catch fire as dust and shavings during processing, thereby developing high temperatures. Here, too, Extover® offers a safe way to extinguish the source of the fire quickly and in a controlled manner, without causing any damage by extinguishing water, extinguishing powder or corrosion.

Extover® is ideal for the following applications:

Use as extinguishing agent

Extover® has been specially developed to combat lithium battery fires and metal fires (class D fires). For this purpose, the granules are applied to the source of the fire with suitable aids (shovel, tube, bucket, sack, etc.). Due to the low weight and the very good flowability, it is easy to handle. Extover® is applied directly so that the source of fire is completely covered. We recommend a cover height of 10-30 cm above the fire, depending on the object to be extinguished.

The Extover® granules surround the source of the fire and stifle the fire within a very short time. At particularly high temperatures, Extover® melts and spreads over the source of the fire. The material absorbs a lot of heat in the form of melting energy and thus cools the fire. It forms an airtight seal, which caked on cooling and eventually extinguished the fire. A re-flame is effectively prevented.
After the extinguishing process, Extover® can be easily collected or absorbed. Uncontaminated granules can be reused.

Use as preventive fire protection for lithium batteries

Lithium batteries are classified as Class 9 dangerous goods. They are generally considered safe, but under certain circumstances they can also burn without external influence (thermal runaway, thermal runaway). Since this is a metal fire, the battery fire is difficult to extinguish.

Possible sources of danger for a battery fire are:

For collection, storage and transport therefore special boxes are offered by different manufacturers, which limit the eventual fire scenario to the interior of the container. The containers are loosely filled with Extover® as extinguishing agent or with Extover® filled cushions. Extover® granules meet the requirements of Packing Instruction P909 (ADR) for a non-flammable, non-conductive fire protection filling and may be used accordingly for these special containers.

Use Extover® to improve the fire safety of such containers.

Hazardous material containers must be tested and approved in their entirety. These tests refer only to the Extover® granules.